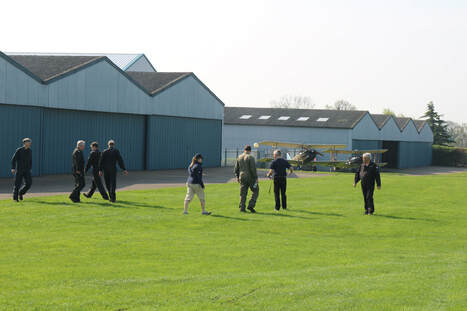 The infamous routine walk through....!  An essential part of pre display preparation as every flight and every location is unique with different topography, site orientation, wind vectors etc.  The pilots walk through the routine in detail to ensure that they each know exactly where they are supposed to be and to ensure that any conflicts are identified and resolved on the ground rather than at a critical point in the air! 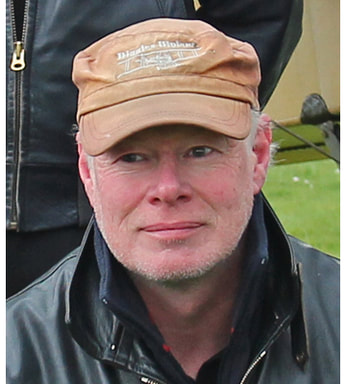 ​Team Leader:​ Matthew Boddington
Part of an aviation family, Matthew spent many hours flying with his father and two sisters in Tiger Moths, Stampes and Rapides including 4 up aero’s in a Stampe.
Matthew was introduced to WW1 aviation at an early age with visits to the film sets where the films of The Blue Max, Darling Lili  Von Richthofen and Brown were made .
He went on to gain his PPL in 1986 flying Auster Aircraft and  graduated to  Tiger Moth and Chipmunks with the Barnstormers Flying circus whilst gaining his DA.
Matthew's Display Authorisation unusually  allows him to carry out Wing Walking and Limbo Flying to 3ft. In his 1400 odd hrs, nearly all on vintage Aircraft, Matthew has flown everything from a Luton Minor to a North American Harvard. He is also and Authorised Air Test Pilot by the CAA and both an LAE and Inspector for the LAA.In the Team he has flown the Fokker DR1 in displays but now mainly flies the  BE2 Replica that was originally built by his father Charles and Uncle David for a film in the late 60’s. Matthew and Steve Slater acquired the Aircraft in 2005 and rebuilt it to flying condition.
​ 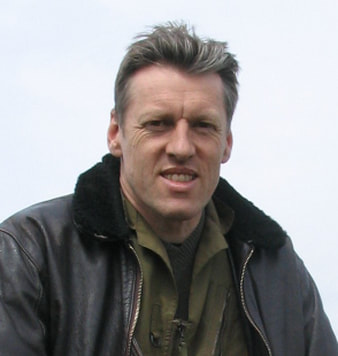 Peter started flying at Biggin Hill in 1978 and shortly thereafter joined the Tiger Club at Redhill .After a spell as a flying instructor at Redhill and Blackbushe airfields, he gained his ATPL and in 1987 joined Air UK as a First Officer on the Fokker F27 followed by the BAe146.
A taste for aerobatics soon led to ownership of a Pitts S1 in 1988 and then display work with the Pilatus P2. He gained his command in 1991 and flew as Captain on the Fokker F27 followed by the F100 & finally the Captain on the F70 for KLM Cityhopper, retiring in 2016.
Peter currently flies one of the teams Fokker Triplanes which he built himself.  He is also building a Sopwith Camel which hopefully will join the team line up when ready. He now has over 14,000 hours logged including over 250 hours on the Fokker Triplane. 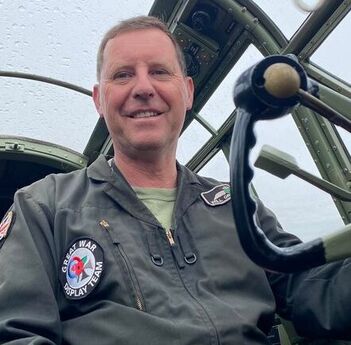 Will Greenwood
Will learnt to fly at Shoreham in 1986, after progressing from gliders at 17yrs old.  Now having over 3000hrs of flying experience mainly in vintage and tailwheel aircraft, also previously being deputy head of LAA/PCS instructor training. He is also an Air Test pilot for the LAA & CAA.
Display flying came around after he gained his rating in 2006. Since then Will has flown displays in the UK and Europe, ranging from many vintage types to V-12 Warbirds. He currently owns and displays one of the Fokker DR1 Triplane's  (White snake on a black band) 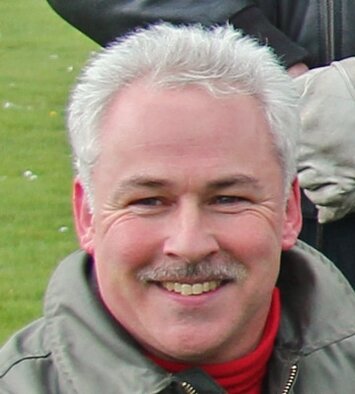 Dan joined the Royal Air Force at 18 and went to London University to study Aeronautical Engineering. Flying training began in 1984 on Jet Provosts and he gained his wings on the Hawk. After  weapons training  Dan flew operationally on Harriers  at RAF Wittering and also at RAF Gutersloh in Germany gaining 1200 hours on type.
In 1992 he was selected for the USAF Test Pilot course at Edwards Air Force Base and during the course flew 43 different types of aircraft ranging from the F-15 to the C5 Galaxy. After Edwards he was posted,  to the Defence Research Agency  at Bedford, and then to Boscombe Down.
In 1996 Dan left the military to fly as a test pilot for the Civil Aviation Authority and  was involved with  the Certification of many types of aircraft ranging from the Airbus A380/330/340/320 family to  lighter aircraft. Dan left the CAA in 2007 and now works as an independent test pilot, Training Pilot and businessman.
​ 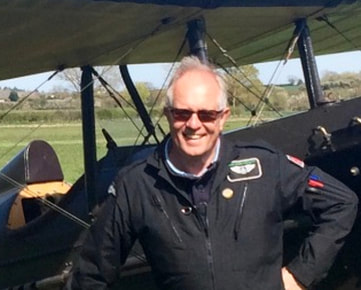 With a father who was a flight test engineer at Vickers Armstrong (now BAe) involved with everything from Varsitys to Valiants, VC10s and Concorde, Trevor has always had a keen interest in aviation and particularly flying.
Trevor started as a glider pilot at Mendip Gliding Club and went on to gain his PPL with Staverton Flying School in his late 20’s. Since then Trevor has owned shares in various aircraft including a Chipmunk and now owns a 1947 ex Army Air Corp Auster T7 that he also displays. Whilst working for Air Atlantique Classic Flight for over ten years Trevor flew a large variety of aircraft, many of them iconic vintage types.
Trevor has accumulated over 1000 hours and is a Class Rating Instructor and LAA coach. He particularly enjoys flying the replica SE5a in the Great War Display Team helping bring to life for airshow crowds the heroic exploits of the pilots from that era. 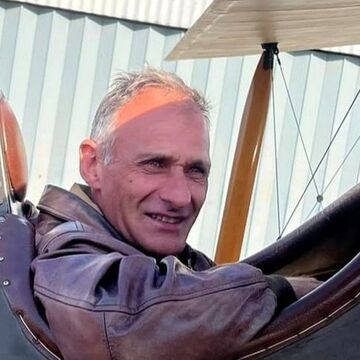 ​John started flying fixed wing microlights at Sywell in 2004 and moved onto flying a variety of group A planes in 2010. He converted to a tail dragger flying a Super Cub, of which he enjoyed immensely and flew a PA28R from Coventry for operation of a VP prop and retractable undercarriage differences. His interest in aerobatics lead to obtaining his rating in 2018 flying an Extra 200 and again in 2019 flying the Extra completing a formation and tail chase course. This all helped him to obtain his Display Authority in 2022 after being mentored by his DAE Blade1 Andy Evans.  John  flies and owns one of the team  SE5a replicas 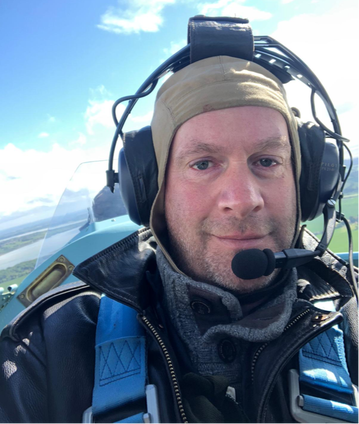 John  started flying at the age of 5 in gliders, a business which he is still in, maintaining and repairing gliders and light aircraft. John has over 3000hrs of flying experience mainly in classic aircraft and gliders, he currently owns the Nieuport 17 which has joined the team in 2023.