The Bremont Great War Display Team have worked many times with main stream TV companies like the BBC,  ITV and other well known documentary and film producers to help bring to life their projects and news articles.  Working with the Directors and Presenters we can help create your ideal shots and even have the capability to install GoPros or fly a member of your team to add greater realism.  The photo above shows Sophie Raworth of the BBC filming a WW1 centenary news item with Team Leader Gordon Brander. 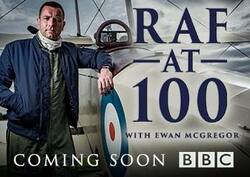 ​Ewan McGregor and his brother Colin (RAF Call Sign Obi-2!) filmed with the team at Sywell for their BBC RAF 100 documentary as described by Sam Wollaston of the Guardian below, 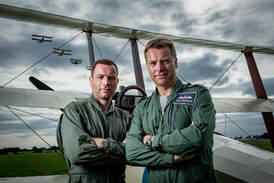 " The BE2 does at least give Ewan the opportunity to say Fokker. He sees them, too – the Fokkers – surprising him from behind as he tootles along enjoying the view. The problem with the BE2 was that the Fokkers were much faster and had machine guns, so the BE2s tended to come back down to earth in flames."
ITN Foreign Correspondent John Irvine flies with the Great War Display Team at White Waltham Airfield for a RAF 100 News At Ten item in 2018.  See link below...
​​www.itv.com/news/2018-07-13/raf-centenary-highlights-bravery-of-britains-early-pilots/
The team were also involved with the Flyboys movie and more recently Wonderwoman and are currently involved with a major film project due for release next year.